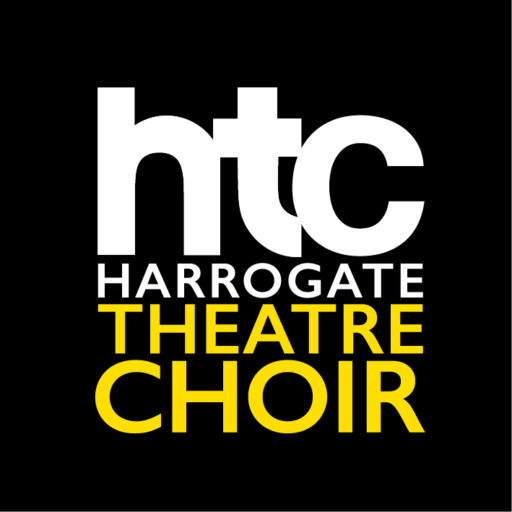 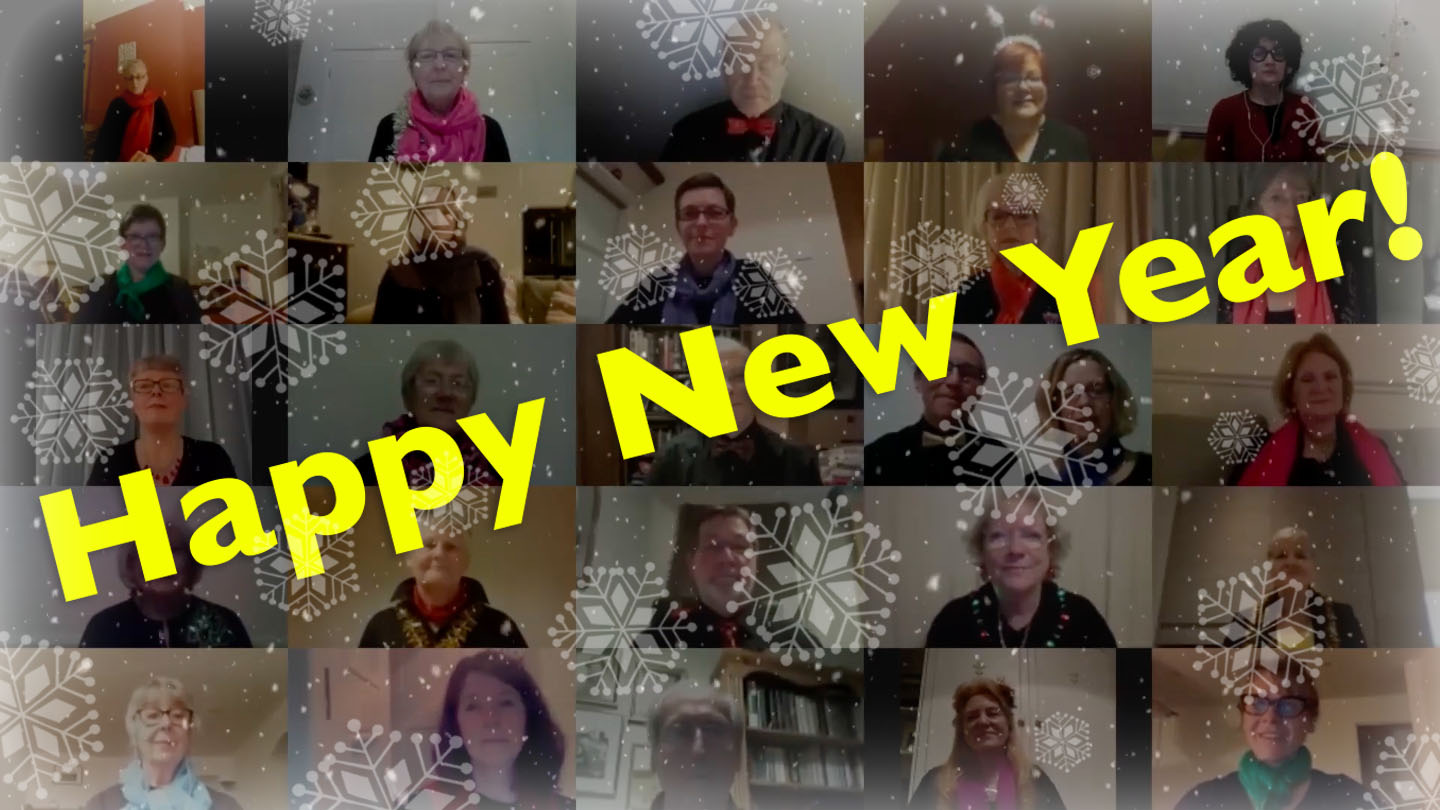 Well, who could have predicted a year like 2020? For the first time, families and friends were not able to come together to enjoy live concerts, shows and pantos in the run up to Christmas, and it has been so sad to see empty auditoriums which should have been filled with love, laughter and good cheer.

Back in March, it was also a sad day indeed for Harrogate Theatre Choir when we realised that the lockdown restrictions meant that we could not continue rehearsing on Thursday evenings.

But thanks to the resolute efforts and determination of our Musical Director, Catherine Field-Leather, we have incredibly achieved so much more than we expected.  Here is a look back at the year that we became a choir in lockdown.

We had so many plans at the beginning of the year.  Centre stage was a recording session in mid March to record our very first album.  Suddenly, we were unsure as to whether or not it would go ahead.  We had all worked incredibly hard during the first two months of the winter term, rehearsing the songs for the album, getting the harmonies just right and perfecting the diction.

We were all so relieved that we were able to go ahead with our recording as, just a week later, the country went into lockdown.  ‘BINGE’ has been a major achievement for HTC this year and one we are all very proud of.  You can find out more about ‘BINGE‘ here.

It could all have fallen very flat at this stage, but Catherine started talking about resuming our rehearsals via Zoom – something most of us had never even heard of!  Whilst it was not for everyone, around 35 of our 50 choir members were keen to be part of the HTC lockdown choir.

Rehearsing via Zoom was not always easy but we started recording our individual voices at home, using backing tracks that Catherine had recorded for each voice part.  She then cleverly mixed our voices together, and it was so rewarding to hear ourselves singing all together again.

Who would have known that Emma, one of our choir members, was also a dab hand at video editing? She cleverly added another dimension to our recordings by asking us all to record ourselves singing and, by the end of June, we had produced our first three self-isolation performances.  You can watch all our videos by visiting our YouTube channel.

This was HTC’s 10th anniversary year and, sadly, the big party planned for 4th July had to be postponed, as well as the launch of our album.  Instead, we managed an end of term quiz via Zoom and, surprisingly, went into our summer break feeling pleased that we had achieved some success with our lockdown performances.

We made good use of Facebook, Instagram and Twitter to ‘perform’ for our audiences!  Catherine also launched Project DistanSing, aimed at giving new people the chance to join HTC, especially if their own choirs had been unable to continue.

We managed a low key, but successful, socially distanced launch of ‘BINGE’ in October, and have been delighted to raise over £600 for MIND in Harrogate District from our sales to date.

Leading up to the festive season, we were busy recording a selection of Christmas songs which we all enjoyed listening to at our end of term virtual concert which you can also enjoy here.  Our newly formed thespian section also performed the HTC alternative Nativity.  Singing and laughing together was a great way to end the year!

Here’s what some of our members have to say about being part of HTC during 2020:

“Well 2020 wasn’t the singing experience I was expecting. It is a social activity where the human interaction and shared goal is really important to me. So singing in the upstairs bedroom on my own was a bit odd to begin with.

“I am impressed with how we have managed to adapt to change and I am hugely grateful to the far-sighted and creative people who sorted out the technical stuff that has ensured that we have kept on going.  2021 looks like it will be a bit more of the same, but I am really looking forward to when we are once more released out into the wild for a bit of communal singing”.  Rowenna

“Belonging to the choir has been so important to me during this year.  On the days when I felt low, anxious or worried, a Zoom rehearsal always uplifted and cheered me.  Listening to my voice recordings was always a low point and I was very close to leaving in the Summer.  However I’m glad I stayed and I thought that the Christmas Party was a wonderful event and the highlight of the year. Thank you HTC.”  AM

“I joined the Harrogate Theatre Choir DistanSing project in May 2020, after reading about it on Facebook.  It was a bit daunting at first, especially recording my own voice and sending it off.  The mixed recordings are fantastic.  Initially, I doubted that my voice was in this wonderful sound but Catherine assured me that it was.  It has been very uplifting to be part of the choir during this strange year.”  Tina M

“A choir is not a choir unless it sings. Music on the printed page or screen is not music to someone who cannot interpret it or read it.  One might even say that music does not exist unless it is played and sung – in short performed and shared with others and most especially a receptive audience.

“HTC has tried very hard, with Catherine as the guiding light, to keep choir life moving over 2020. There have been many changes and challenges for most of us. Some HTC members have had a far worse year than others, and I really feel for them. I personally will be glad to see the back of this year.

“I have found Zoom rehearsals tiring but also a means of keeping touch with friends and colleagues in HTC. Some weeks this past year have been especially bad for me, but there is always someone who is worse off. Singing has helped me to cope.

“Singing around the house is not the same as singing physically with the choir, but having something to rehearse has proved that we can continue. I am looking forward to the days when we can actually meet up to sing. Besides I owe several people hugs too…”  John

“I’ve learnt to be more aware of timing and to be more self reliant, rather than following everyone else.  Doing the recordings has given me a purpose during lockdown and I’ve enjoyed hearing the end result when everyone’s voices are put together.”  AG

“A very strange but enlightening year, singing and recording on your own has at times been very hard, but confidence grows with each song.”  AR

“…..it was great to have singing to look forward to in the pandemic and definitely a boost to the spirits.  Zoom rehearsals are a bit strange but they led to spin-offs like self-recording and coaching which has helped me improve my singing a little.  Listening to the end results after Catherine has knitted all the voices together is fabulous.”  AG

“As someone who has only been with HTC for just under 1 year I would like to say a big ‘Thank You’ for the warm welcome I received on joining and for the great satisfaction and sense of achievement I have enjoyed during 2020…..

“…I have been amazed at what can be achieved with individual recordings and the use of Zoom,  as a result of the skilful application of modern technology!  Very many thanks to Chris and Catherine and all those in HTC who have made this possible.” Mike

Finally, a word from our Chair…..

“Having been in and out of hospital for the latter part of 2020 it has brought me great comfort to continue to journey with the choir, albeit from a distance. What has been achieved collectively by our MD, the Committee and wider membership is a credit to the wonderful ‘family’ that is HTC.” – Chris Parkin

Thank you to all our followers and supporters – we look forward to being able to sing to you again in 2021. Wishing you a very happy and healthy New year from everyone at Harrogate Theatre Choir.