We stage a number of our own concerts each year, partly because we love performing but, more importantly, to raise money for our chosen charity of the year.

We are also available for bookings, either as a full choir or as a small ensemble, for parties, weddings, memorial services or just about any other private function. If you have a business, why not think about booking us for your entertainment at the next corporate function you organise?

Around Christmas, of course, we perform a festive repertoire for all manner of seasonal events. Examples of Christmas performances in previous years include The Harrogate Rotary Club annual dinner, Fountains Abbey Music and Light event, and Knaresborough Christmas Tree Festival, to name but a few.

In October 2020 we released our debut album “BINGE”, with half the proceeds being donated to Mind in Harrogate District. Listen to tasters of all the album tracks on our CD page.

You can also listen below to two of the tracks in full, accompanied by videos: “Seasons of Love” and “Pie Jesu”.

“Seasons of Love” is a song from the 1996 Broadway musical “Rent”, written and composed by Jonathan Larson. Harrogate Theatre Choir is known for its close 4-part harmonies and this song showcases them perfectly!

“Pie Jesu” was probably the most well known section of Andrew Lloyd Webber’s “Requiem” which premiered in 1985. Harrogate Theatre Choir performed “Pie Jesu” at a concert commemorating the 100 years since the cessation of World War One. The song demonstrates our versatility as a choir and it just had to appear on the album.

Most of 2020/21 was all about our Self-Isolation Performances! We might not have been able to meet face to face during the lockdown restrictions, but that did not stop us singing! We continued to work on new music together via video call and then, through the wonders of technology, we recorded our solo voices which were then mixed together and shared on social media. We hope you enjoy our Lockdown repertoire and, because we had time on our hands, we had a bit of fun creating videos to showcase the songs!

We are definitely a choir for hire! So if you have an event coming up and would like Harrogate Theatre Choir to be part of it, then please contact our Secretary, Fiona Dowson, on htcsecretary17@gmail.com. 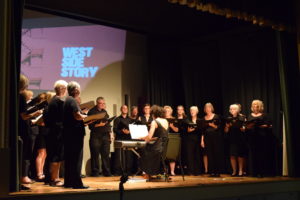 We are available for hire (full choir or a smaller ensemble) for weddings, memorial services, private functions or any other event. Please contact our secretary on htcsecretary17@gmail.com to discuss your requirements.